Hospitality has always been a top priority in Vienna. People meet over eating and drinking.

A Beisl is a typical, small pub which serves traditional Viennese food at moderate prices, which does not mean it must be of poor quality. Such places can be found in many locations, and they often have a significant fraction of regular guests from the neighborhood.

If you want to try Viennese cuisine, probably the most famous dish is Wiener Schnitzel, originally a veal cutlet enveloped in crispy breadcrumbs, but nowadays mostly offered from pork or chicken (which are cheaper). Other typical foods are Tafelspitz, a delicately boiled cut of beef; Rostbraten, the Viennese equivalent of entrecôte and goulash, which the Viennese borrowed from Hungary (which was then part of the Habsburg empire). As you can already guess, vegetarianism wasn’t invented in Vienna. Nonetheless, even people who don’t eat meat can enjoy typical Viennese desserts: Kaiserschmarrn (follow the link for a description) or Palatschinken, thin pancakes filled with jam.

The Viennese Kaffeehaus (coffeehouse) is more than just a place where to have a quick coffee. In fact, it can be considered as a kind of public living room where one sits over a single cup of coffee for many hours, reading newspapers or books. There are many traditional coffehouses in the inner city, and already in the early 20th century, those were the focal points of intellectual life in the city. Peter Altenberg, a famous writer and poet of that time, named the Café Central when asked for his residence, and had his mail delivered there. It is located in the ground floor of Palais Ferstel, where we will have the Conference Dinner. Even today, Altenberg can still be seen sitting there – as a statue.

You will encounter many traditional coffeehouses when strolling through the city, and one can be found in proximity of the conference venue: Café Museum, which is located at the northwest corner of Karlsplatz. Its original interior decoration had been designed by Adolf Loos, but is unfortunately lost. Among many others, the painters Klimt, Kokoschka and Schiele were regulars there.

Even though you will most likely succeed ordering just „a coffee“, Viennese tradition has developed a large variety of that drink, depending on how it is prepared. Don’t worry if you can’t keep terms like Mokka, Verlängerter, Melange, Einspänner, Kleiner Brauner apart – many Viennese people can’t either. All of those are merely composed of five ingredients at most: coffee, water, milk, sugar and cream. A glass of plain water is always served with the coffee.

Typically, coffeehouses also offer a selection of food, snacks, and – most notably – various kinds of desserts. Pastries that go well with coffee are Apfelstrudel (filled with grated apples) or Topfenstrudel (filled with sweet cheese), the latter often being served with vanilla sauce.

Another typical institution in Vienna and surroundings is the Heuriger, a kind of tavern where wine-farmers sell their own products. The name Heuriger literally means „of this year“ and tells they serve wine from the most recent harvest. Originally only beverages were sold and you had to bring your own food, but nowadays every Heuriger has a bar where you can fetch some typical farmer food.

A traditional Heuriger does not sell any alcohol which is not self-made; that also means they do not sell beer. However, there are some touristy places, which are rather a restaurant than a Heuriger – Grinzing is such an area which has more tourists than locals. More traditional (and also less expensive) Heurige can be found e.g. in Nussdorf (terminal station of the northbound D tram) or Neustift am Walde (Bus 35A has a stop by that name). 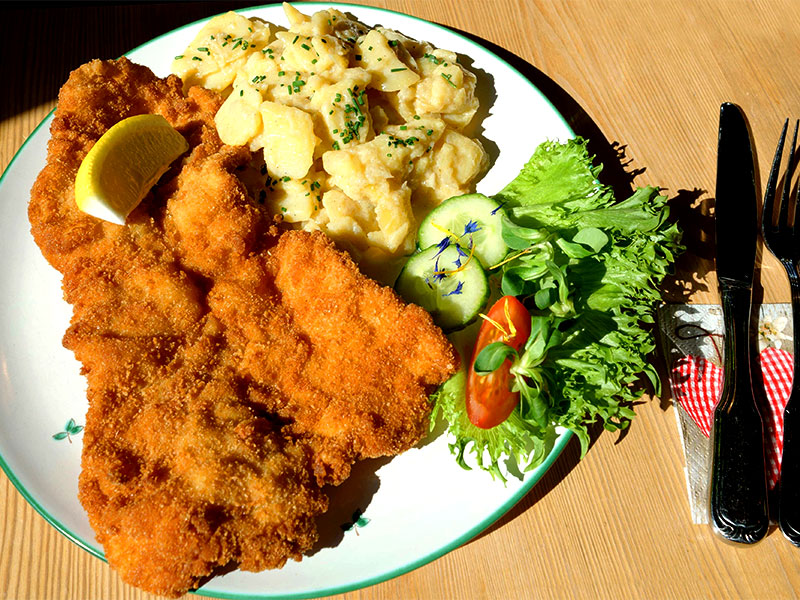 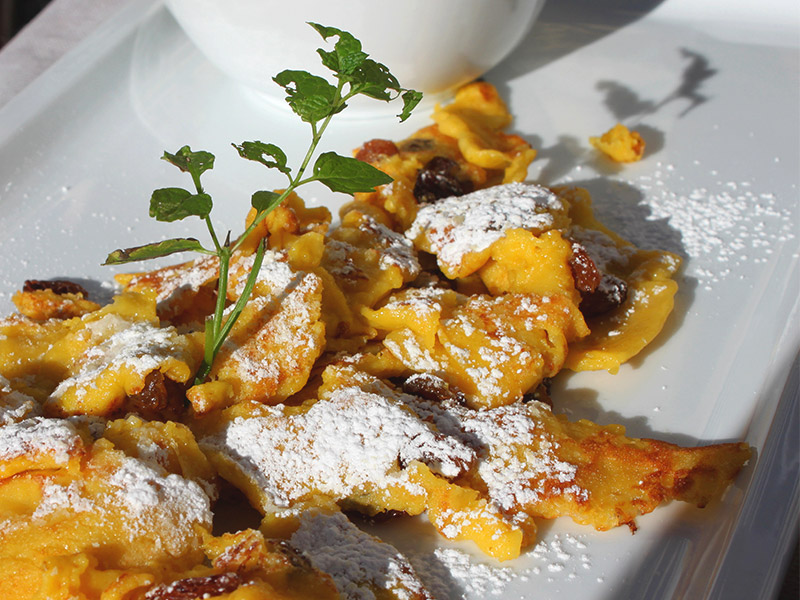 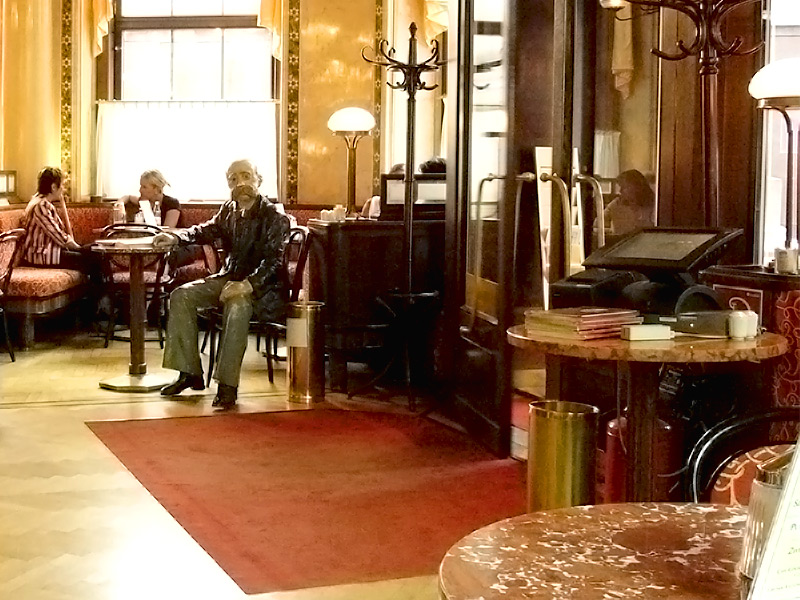 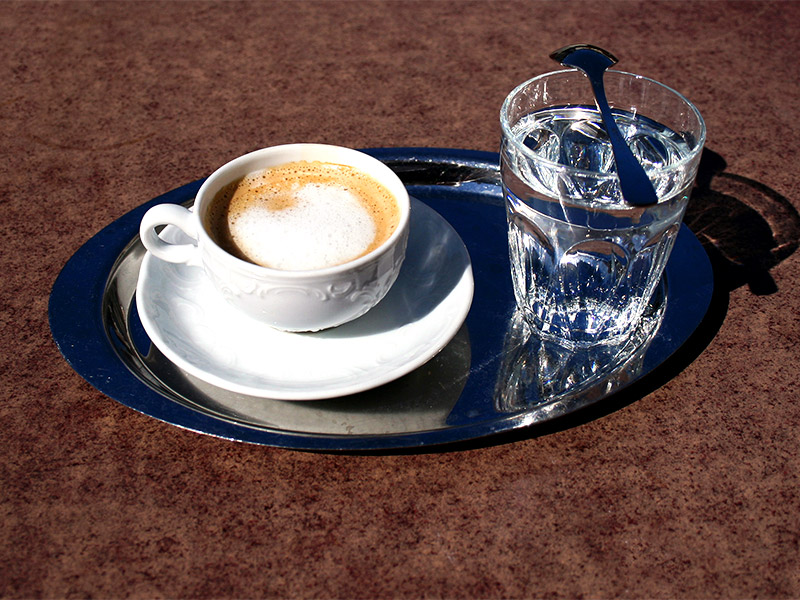 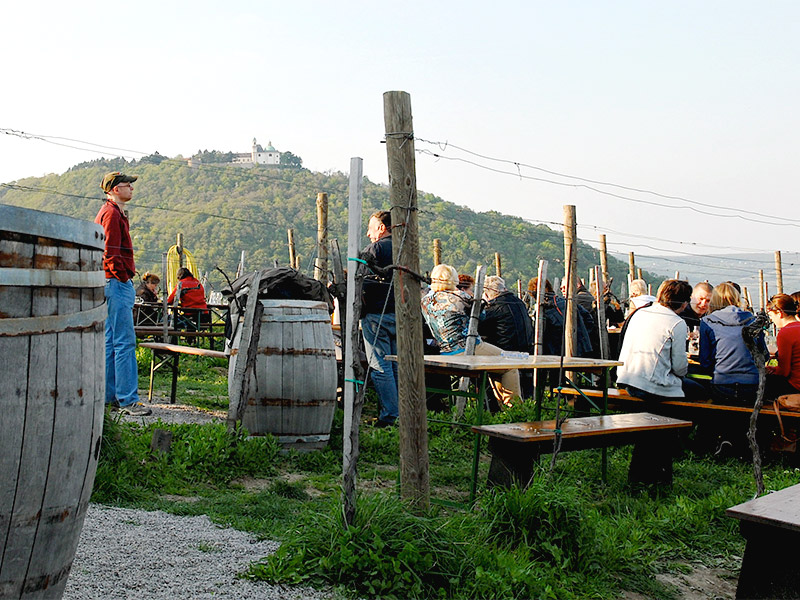